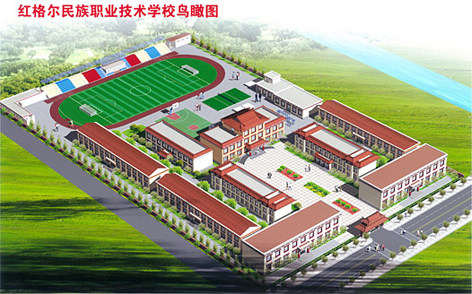 Located in a pastoral setting of grassy hinterland, surrounded by mountain vistas, the site is conveniently located to maximize contacts with the large population of ethnic nomads. It forms a natural connection with the nomadic farmers.

Officially named “The Hungkar Dorje Technical School” in honor of its founder, its mission is to further the cultural heritage of indigenous ethnic groups and promote learning and mastery of modern technical skills. Our aim is to promote healthy economic and cultural growth in Tibetan society and to build a private educational facility complete with up to date teaching equipment and capabilities, in accordance with the “Educational Law of the People’s Republic of China.” Our goal is to preserve and protect traditions and culture which would otherwise be lost. 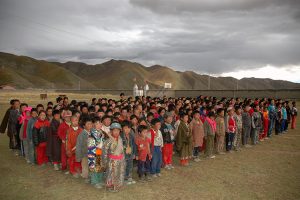 Between 40 and 60% of Tibetan children do not attend school and in the Tibet Autonomous Region, less than 25% of Tibetan children graduate to secondary schools. With our first 8 graduating classes behind us, the attendance at the HKD Multi-Disciplinary Technical School (the Mayul School) has increased from 180 students in 2011 to over 400 at present. After graduation, students are able to transfer to Lanzhou Nationalities University.

The school has expanded its program in Tibetan Medicine which is taught by two well trained traditional doctors. With ongoing ESL classes and courses in Tibetan, Mandarin, traditional art, and math, the Mayul School has gained popularity and fame throughout much of the Tibetan Plateau, drawing students from as far away as Szechuan Province and Lhasa. Our Thanka painting classes are being taught by master artistes trained at Rebkong Monastery. We are introducing a traditional art form by offering a newly developed carpet weaving program taught by 2 master weavers. Student enthusiasm is at a high point.

The Hungkar Dorje School will keep costs down to about $80.00 per month for each student in the 3 year program. This includes all costs for boarding, food, health care, educational materials, and teacher’s salaries. Funds for the school’s operations come from Prefecture support, private donations, a modest tuition, and the sale of handicrafts by artisans affiliated with the school.  For families who cannot share in the cost of education there will be no fee. Additionally, costs will be augmented by the ongoing sale of medicinal and culinary herbs as well as by other businesses planned for development.

In addition to the technical school, a new primary school was built in 2015 and now has over 100 young students. The primary school will offer local children a first opportunity to obtain an academic education and a path to progress to schools of higher learning.

EXPLORE THE MANY WAYS YOU CAN HELP

The Importance of a Three Language Approach

Mayul’s Tibetan Language classes provide an opportunity for children who can speak Tibetan but are often illiterate, to gain proficiency in their own language. Having the ability to teach children in Nomadic Communities helps ensure that cultural assimilation does not take place and that the true history of Tibet is taught alongside more traditional subjects. David Germano, Professor of Tibetan and Buddhist Studies at the University of Virginia, says: “[Studies] have shown consistently that Tibetans who train and test in Chinese medium contexts persistently perform worse than when they are able to train and test in Tibetan. By using their own mother tongue for training, education, and testing, they perform markedly better on standard intelligence and other tests than they do when they are forced to use Chinese.”

The purpose of education is for teachers and students to convey and receive knowledge by the most easily understood means between teachers and students. As far as the Tibetan students in our province are concerned, they are not familiar with Chinese and so they are not able to think about or express their ideas in Chinese, not to mention being able to use Chinese to creatively analyze problems. However, in daily life the Tibetan mother tongue is the most familiar tool for analyzing problems and expressing ideas, and therefore it should be the most effective tool for study in their lives at school.

In 2010, Quang Wei, the Qinghai Provincial Secretary, stated that “the promotion of the common speech (Mandarin) is important from an economic point of view”. In order to advance within the system of higher education and later within the business community or government, knowledge of Mandarin is a requirement. Tibetan students are strongly motivated to learn Mandarin to increase prospects for getting good jobs, educational opportunities and so on. Consequently, at a minimum, a bilingual education rooted in minority language and more culturally relevant education seems the best option. Tibetan students have studied Chinese for 10 or more years – but they are still unable to communicate in Chinese. In many Western countries, there has been much research into methods and materials for teaching English as a second language which have lead to positive outcomes in teaching English in non-English speaking countries. In order to thoroughly change this situation, the Mayul School intends to renew its understanding of how it can effectively teach Chinese to Tibetan students.

Most of the older people in Qinghai Province have never been to school. Because they did not need formal education in their lives many parents think that education is not so important for their children. As a result many students are suffering from low levels of education. This puts the children of this generation at a great disadvantage in their lives. Currently, students must pass the exam from the PRC government to find a government job. This exam is in Chinese and English. Tibetan students must learn two foreign languages very well (English and Chinese) in order to pass this exam otherwise there is little possibility of them getting a job. The level of English proficiency in Golok is very low, especially among the students from Tibetan schools. They are not taught English until they enter high school. This is the one of main reasons why many young Tibetan students do not pass this exam.  Learning English is one of the few ways that Tibetan people can compete for available jobs. 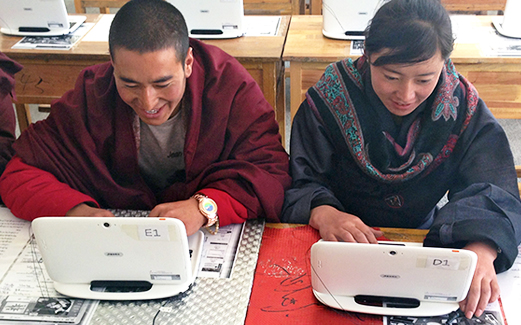 Thanks to Mai Nguyen for this description of daily school life in Golok.

Students at the Hungkar Dorje Vocational High School go through a 3 year curriculum.  They must study all the core subjects in the first year:

In the 2nd year a major is chosen from the following list:

The school has two principals and 22 teachers. Most students are from Golok but many are from further away. Approximately 90% of the students have never been to school before. The primary reason for student’s choosing the HKD Vocational School is to study and preserve their culture.

School usually starts on September 1st and continues until December 31st. Spring term begins about March 9th. The school, as all schools in Golok, closes mid May to mid June to dig caterpillar fungus (Tibetan: Yartsa Gumbu).This is the major source of income in Golog. The final term is mid June to August 1st. There are currently about 400 students in all.

Students typically get up at 6:00 am and study for one hour in the school courtyard. From 7:00 to 7:40 am they go to their classroom for aspiration prayers and self study. Breakfast is next before starting first class which goes from 8:20 to 9:20. Second class begins at 9:30 and then 20 minutes of exercise – running around the school and stretching. Last year exercise was Tibetan dancing. 10:50 am to noon classes continue until lunch is served in the school canteen. Some students who are from the village are allowed to eat at home. After lunch, there is a 2 hour rest before afternoon classes begin again. Dinner is served at 6:30pm. After dinner all students study in the courtyard. Finally, from 8:00pm to 9:40pm there is self study in the classrooms. Sometimes there is extra tutoring in this time. Then lights out is 10:00pm. The School has one class on Saturday and then a meeting where school rules and events are discussed. Students are free from noon to Sunday evening at 7:00 pm when they return to school.

The HKD Vocational school provides free housing for all the teachers but teachers pay their own food and electricity. There are 2 dormitories, one for boys, and one for girls. Very few students sleep out of school, even those from the local village. There are up to seven students in each room, with bunk beds. This year new flooring and under floor electric heating has been installed in all the classrooms and sleeping quarters.